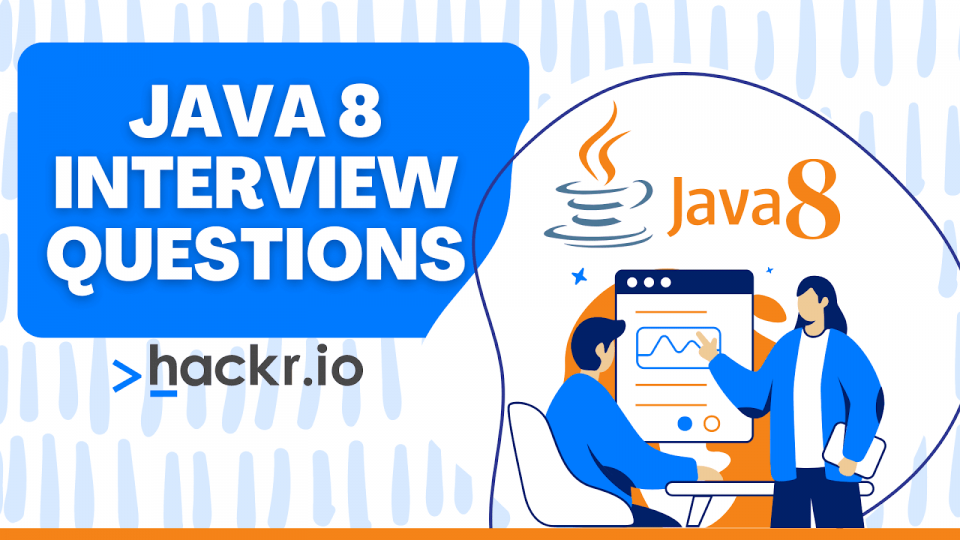 Java has been well known for adding various new features from time to time, and Java 8 SE is one of the more recent releases of the programming language. Released in March 2014, it focuses on overcoming the loopholes and drawbacks of earlier versions, along with adding new features and characteristics. Java 8 SE was developed with the purpose of implementing functional programming, creating a new JavaScript search engine, manipulating the date-time with new APIs, and deploying a new streaming API.

We list several of the most common Java 8 interview questions and answers here, updated for 2022. We’ve split the questions into beginner and advanced questions.

Oracle Corporation built Java. It continues to update the language, adding features and conveniences. The Java 8 SE version adds such features as functional programming and a new JavaScript search engine, among other things.

2. What is the latest version of Java?

3. Which are the most distinct features of Java 8? The most distinct features of Java 8 include:

4. What is a Lambda Expression?

A Lambda Expression is an anonymous function that accepts different sets of input parameters and offers a variety of outputs. In essence, it is an anonymous method. It is useful because it offers a functional interface.

5. Why is Lambda Expression considered a block of code?

Lambda Expression is considered a block of code because it has no name and can exist with or without parameters and results.

6. What are the different parts of Lambda Expression?

There are three different parts of Lambda Expression:

7. How is the parameter list of Lambda Expression different from the lambda arrow operator?

A lambda expression can carry zero or any number of parameters at one time. The lambda arrow operator separates these parameters from the list and body using the icon "->". 8. What are the features of a lambda expression?

The features of lambda expressions are:

Optional is a final class that is introduced as an integral part of Java SE8. It is a java.util package that can have either one value or zero value.

11. What are the advantages of Optional?

Optional has the following advantages.

Type Interface refers to the compiler’s ability to determine the type of parameters when the method is called, i.e., at compile time.

13. What is the Default Method?

A default method adds functionality to an interface without breaking down the implementing class, and offers backwards compatibility.

15. What is the compulsion in using Stream Pipeline?

The compulsion in using Stream Pipeline is the presence of a terminal operation which helps in returning the final value and supports termination of the pipeline.

16. Explain Predicate and Functions along with the code. What are the similarities?

Predicates and functions are both functional interfaces.

The Core API classes for Java SE 8 include LocalDate, LocalTime, and LocalDateTime.

18. What has replaced PermGen? PermGen is used to store classes and has been replaced by MetaSpace in Java SE 8.

19. What is the functional interface?

The functional interface is the interface which carries only one abstract method. The code example below explains this further.

20. Is there any difference between the Functional interface and SAM interface?

21. Can we define a functional interface? If yes, how?

22. What are the guidelines that are needed to be followed for Functional Interface?

There are several guidelines stated below which are needed to be followed for a functional interface. These are:

23. Which are the two most popular methods that can be used for defining any number in a Functional Interface?

The two most popular methods used for defining any number in a functional interface include static methods and default methods.

24. Is it mandatory to define a Functional Interface with @Functionalinterface annotation?

No. it is not mandatory to define a functional interface with @Functionalinterface annotation.

25. What is the compulsion in the Functional Interface definition?

The compulsion in the functional interface definition is when the Java Compiler forces us to use one abstract inside the interface.

26. What is the link between Lambda Expressions and Functional Interface?

27. How is Collection API different from Stream API?

The difference between Collection API and Stream API are:

28. How is Spliterator a different Iterator?

A Spliterator in Java SE 8 is an iterator interface. The following are the differences between the spliterator and iterator:

29. What are the common types of functional Interfaces in the standard library?

The common types of functional interfaces in the standard library include the following:

30. What is the major difference between Map and FlatMap stream operation?

The major difference between Map and FlatMap stream operation is that the former wraps its return value inside its ordinal type while the latter does not.

31. What is the similarity between Map and Flat map stream operation?

32. What is the advantage of Metaspace over PermGen?

33. What are some examples of Intermediate Operations?

Examples of Intermediate Operations include the following.

34. What are some examples of Terminal Operations?

Examples of terminal operations are:

35. Can we list the numbers and remove the duplicate elements in the list using Java SE 8 features?

Yes, we can list the numbers and remove the duplicate elements in the list by applying stream and then collecting it to set using Collections.toSet() method.

If you have any questions or suggestions, feel free to drop a comment below.

What Is Nashorn in Java8?

Nashorn is a much-improved JavaScript engine that replaces the existing Rhino. Nashorn provides better performance and directly compiles the code in memory that passes the bytecode to the JVM. Nashorn uses the invoke dynamics feature that was introduced in Java 7 to improve performance.

Explain the Syntax and Characteristics of a Lambda Expression What Is Nashorn in Java8?

Lambda syntax-
(Object arg1, int arg2) -> arg1.equals(arg2);
Lambda syntax consists of three parts- a list of parameters, an arrow and a body. Following are the characteristics of the lambda expression.
No need to declare the type of parameter explicitly as the compiler can inference the same from the value of the parameter.
You can avoid parenthesis for single parameter and can use for multiple parameters.
Can avoid braces in expression body if there is a single statement.
Curly braces are used to indicate that expression will return a value which can be avoided for a single statement.

What Is the Meaning of String::Valueof Expression?

What Is a Method Reference?

Difference between Stream’s findFirst() and findAny()?

Can you provide some APIs of Java 8 Date and Time?

Java 8 introduced new date and time API’s to overcome the shortcomings of the older java.util.date and java.util.calender. There are two date-time APIs that fall under package java.time that are Local and Zoned.

What are the defaults methods?