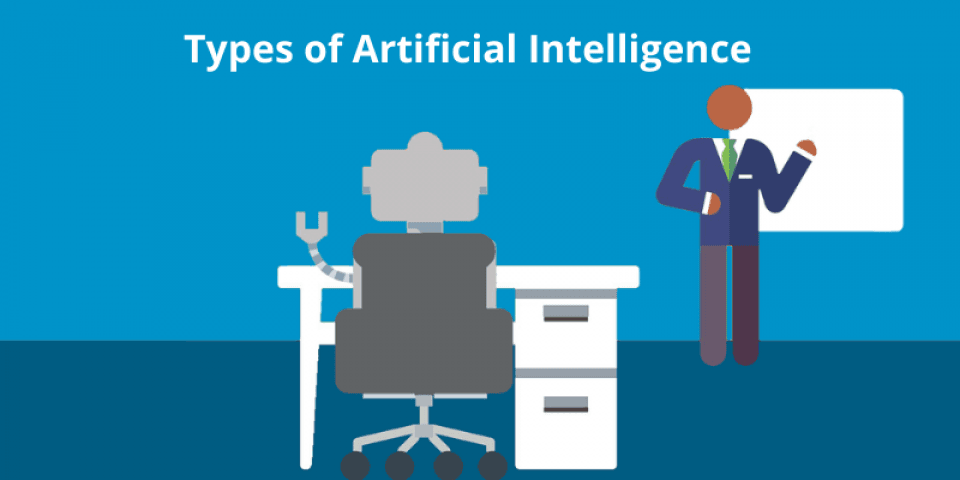 Artificial intelligence a.k.a. AI is no longer a concept constrained by fiction. It is alive! Humankind has already started exploring AI and is making significant improvements with each passing day.

Nonetheless, self-aware, corrupt AI-powered entities that have extensive knowledge and are hell-bent on wiping out humanity all to save humanity from itself - as we’ve seen several times in sci-fi novel and movie plots - is even much farther than a remote possibility.

But yes, AI is here, and it is doing pretty well to help mankind achieve things that previously appeared unachievable or impractical. Today, we have several practical instances of artificial intelligence, such as:

Artificial intelligence or machine intelligence refers to the intelligence displayed by machines. It is the field of research that deals with simulating human-like intelligence in machines. Now, AI is of many types. But before discussing that let’s compare it with machine learning first.

Caution! AI is Not Machine Learning

ML is a branch of AI that deals with allowing machines to learn from data, followed by identifying patterns and forming decisions with minimum human intervention. AI, on the other hand, has a much wider scope with ML being an aspect of it.

Artificial Intelligence A-Z™: Learn How To Build An AI

AI research focuses on developing machines/systems that can emulate human-like behavior, especially in terms of thinking and performing tasks. Therefore, human intelligence is used as a comparison parameter to group the various types of AI.

Now, there are two ways in which all AI and AI-based systems can be grouped into. The first one is on the basis of capability, and the second one takes the functionality as the base for grouping AI.

On the basis of their capability i.e. the ability to do tasks in comparison to human task performing ability, AI is categorized into 3 groups or 3 Types or Article Intellignce; Narrow AI, General AI, and Superintelligence.

The common form of artificial intelligence that is available today is narrow AI. Its scope is limited by the ability to perform dedicated, predefined tasks. Google Assistant, Siri, and even the IBM Watson supercomputer are examples of weak AI.

Narrow AI lacks consciousness and self-awareness, and is less intelligent than humans. As weak AI is trained only for doing a specific task or a set of tasks, they can’t perform anything beyond their defined capabilities. If forced to do so, the results become unpredictable and unuseful.

A machine or system can be considered general AI if it is able to perform an intellectual task with human-like efficiency. The purpose, driving the notion of general AI is to develop an artificially intelligent system that can replicate the smartness and thinking of a typical human.

Unfortunately, there is no existing example of general AI. In other words, general AI is still theoretical and not practical, not yet.

AI researchers, however, are now focusing on developing systems that can be labeled as general AI. The time and effort required to do so are, naturally, unprecedented.

At the super AI level, artificially intelligent systems best, or transcend human intelligence. Such AI systems can perform tasks far better than a human and that too with cognitive properties. A few key characteristics of superintelligence systems are:

Next, we will classify AI on the basis of functionality. This classification of AI takes into account the way in which AI systems behave and feel, also taking in their cognitive prowess and common (machine) sense.

There are 4 groups in which we can put any AI system based on its functionality; Reactive Machines, Limited Memory Machines, Theory of Mind, and Self-Aware AI.

Like Narrow AI, these are the most basic types of AI systems that we have today. Reactive machines cannot form memories and thus, cannot react to future conditions based on their past experiences.

Limited Memory AI systems are capable of storing a few past experiences or some data for a short while. This data is usable, only for a limited time period. The best example, until now, of limited memory AI systems, is self-driving cars. They are able to store information such as:

Self-driving cars are limited memory systems that use their memory storage capabilities to navigate around the road. This, however, doesn’t mean that they are free from errors. It is still a long way for self-driving cars to become a dependable option for common, everyday use.

Use TextBuilder for AI-Generated Text

The Theory of Mind AI refers to machines/systems that are capable of recognizing human beliefs, emotions, intents, values, etc. Such AI systems might also be able to reciprocate/respond to human emotions and/or expressions in a human-like way.

Although no substantial progress has been made in developing the Theory of Mind AI systems, researchers and professionals across the globe are working rigorously to develop such AI machines/systems.

Although self-aware AI doesn’t exist in reality, at least, for now, it is a hypothetical concept that explores AI-powered machines with thinking capability much higher than a typical human mind.

Self-aware AI systems, in theory, have their own consciousness, reason, and sentiments. They have an individuality just like any human being but are much more intelligent than any human in the world.

Artificial intelligence has continuously captured the imagination of humans. Concepts resembling AI have been long used by fiction writers, movie makers, and dreamers, even before AI was a thing.

Now, artificial intelligence is an undeniable reality. Although there is a long arduous way ahead of us, it is a fascinating path that might even help humans to understand themselves better and reassess many notions, including nature and life.

The evolution of AI will lead to the birth of new philosophies. It will be important for us humans, the ones responsible for conjuring these void-of-flesh-and-blood beings into our realm, to responsibly undertake the process of exploring the uncharted territory of machine intelligence.