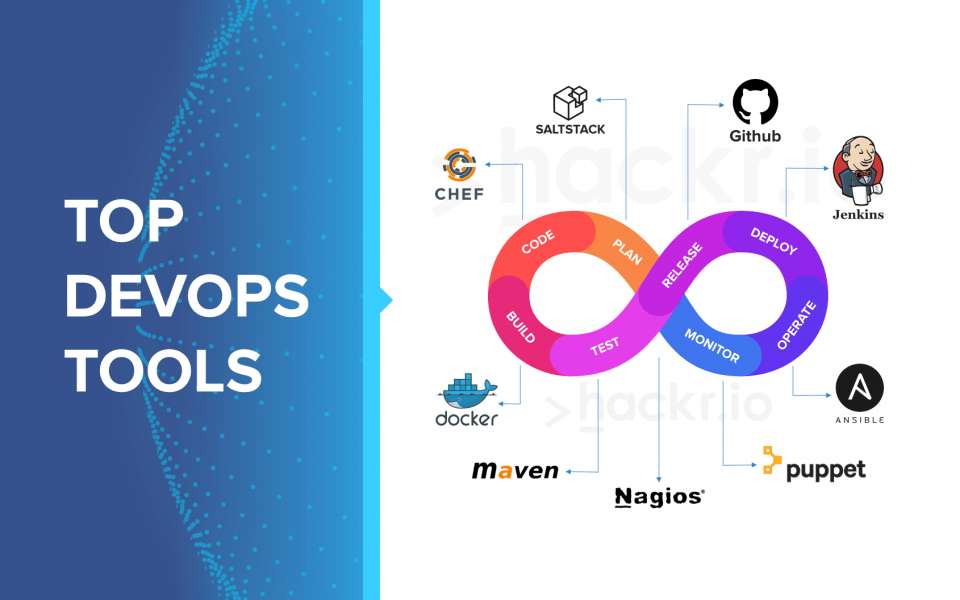 A core concept within the technical fraternity, DevOps is where the software development and operations meet to ensure continuous integration (CI) and delivery (CD). For those of you who are not familiar with the concept, DevOps, if put in layman’s term, is:

A combination of processes in which both the software engineers and operation engineers work as a unified front throughout the entire software development cycle, starting from ideation to production support.

Initially, the development and the service sides were considered as two separate entities and were responsible for handling different dimensions in a software cycle. However, there were numerous siloed challenges such as increased development time, low throughput, etc. faced due to this.

As technology advances, numerous DevOps tools have been developed to make collaboration and development easier. To help you refine your DevOps strategy, we mention 10 top DevOps tools which you should use in the year 2023.

Launched in the year 2013, Slack is still one of the top communication tools used by teams for effective collaboration on projects. This tool in the DevOps arsenal is used by technical organizations across the globe to tear down barriers and offer all team members a clear insight into the workflow. One exciting feature about Slack is that it allows developers to collaborate using toolchains in the same environment they are communicating with other maintenance and service members.

An open-source continuous integration server, Jenkins automates the complete build cycle of a software project. The USP of this tool is the Pipeline feature it offers, which can be utilized by the developers to automatically commit code into the repository, run test cases, as well as fetch reports obtained after testing.

This highly customizable tool provides instant feedback and hence will warn you if a particular sprint is leading to a broken build or is harming the same. Most of the tasks and tools involved in SDLC can be automated using Jenkins, allowing team members to increase their throughput.

Docker is a tool which is at the centre of containerization, a trend which is quickly gaining momentum in the IT world. Docker allows secure packaging, deploying and running of applications irrespective of the running environment. Every application container contains the source code, supporting files, run time, system config files, etc. responsible for application execution.

Using the Docker Engine, the containers can be accessed which in turn can execute applications in a remote environment. The app has allowed organizations to reduce infrastructure costs. According to a report, 2 out of 3 companies who have tried this application have adopted it within 30 days of using it.

Security of software is one of the prime concerns of any DevOps team. As such, the Phantom tool comes as a great help to developers who wish to build a defensible infrastructure from the very beginning of SDLC.

Using the phantom tool, you can collaborate in a centralized environment on an incident and be aware of the rising security threats at the same time. The tool further gives DevOps professionals an option to mitigate such risks instantaneously using techniques such as file detonation, device quarantine, etc.

Similar to Phantom, Nagios is also a monitoring tool which tends to keep tabs on the applications, servers as well as your overall business infrastructure. The tool comes in as a great help for large organizations which have a countless number of circuitry (routers, servers, switches, etc.) in the backend. It alerts the users in case a particular fault occurs on the backend or any device fails. It also regularly maintains a performance chart and monitors trends to alert the user of a possible failure which may occur.

A vagrant is a tool for managing and working with virtual machines in a single workflow. Using Vagrant, team members can share software running environment and can test applications faster without wasting time on setting up configurations.

The tool ensures that the environment for a particular project remains the same across every developer’s machine, and the excuse of ‘runs-on-my-system’ can be thrown out of the window.

Ansible is one of the most simple yet effective IT orchestration and configuration management tools available in the market. Compared to its competitors such as Puppet and Chef, which are loaded with features, Ansible offers a softer outlook and doesn’t hog on your device’s resources in the background.

This tool is primarily utilized for pushing new changes within the existing system, as well as configuring newly deployed machines. Lowering the costs of infrastructure and increasing the replication speed of scalability are just two of the reasons which have made this an absolute favourite amongst IT companies.

Launched in the year 2000, GitHub remains as one of the top DevOps tools for easy collaboration. Using this tool, developers can make rapid iterations to the code, the notification of which is sent instantaneously to other team members. In case of any error or fallout, immediate rollbacks can be done to the previous version within seconds, thanks to the branched history of changes which are stored contiguously within the tool.

Sentry, a tool used by companies such as Uber and Microsoft, is one of the best DevOps tools for error or bug detection. This free tool supports languages such as Ruby, IOS, JavaScript, etc. and further has inbuilt SDKs which can be customized for supporting most languages and frameworks.

The tool continuously scans lines of code across the entire system and sends notifications if it finds an error or problem. Not only does it highlight the problem, but offers a choice of possible solutions which can be incorporated with a single click.

Similar to GitHub, BitBucket is also a tool which helps manage project code throughout the software development cycle. While GitHub still ranks as the top repository, people are shifting to BitBucket due to its reduced cost as well as the feature of the private repository (a feature only available in the paid variant of GitHub).While the core functionality of BitBucket resembles that of GitHub, features such as easy integration with Jira and Trello, inbuilt CI/CD functionality tend to give this tool by Atlassian an edge.

So, these were the top 10 DevOps tools which are being increasingly adopted by companies across the globe. If you think that there are any better tools which we missed, don’t forget to mention them in the comment section below. An Engineer by qualification and a blogger by passion Mayank has been into content writing for past 6 years. He has keen interests in Technology, Automobiles as well as Sports and is an avid follower of American TV shows. Working as a content writer he loves exploring various genres and it is his zeal for writing that helps him come up with creative content for readers to peruse. View all posts by the Author

[DevOps vs Agile] Difference Between Agile and DevOps
Read More

I would also consider GitLab instead of Bitbucket, it’s free features are amazing and it’s really striving to be a central devops platform!