[DevOps vs Agile] Difference Between Agile and DevOps Ten years ago, it was all about Agile. But today, it’s all about DevOps. If you’re not familiar with the differences (and similarities) between DevOps and Agile, you need to be. 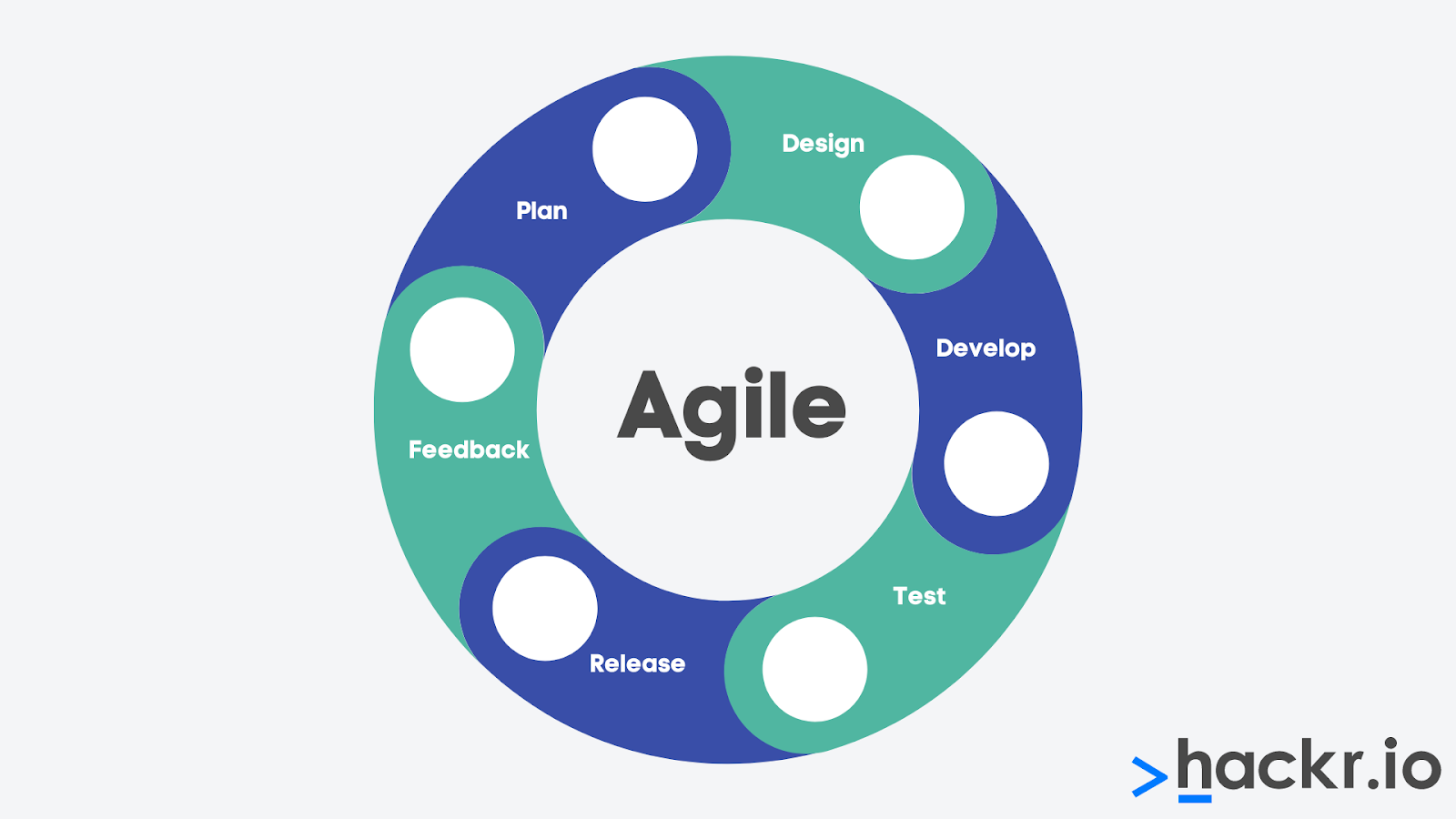 Agile is a software development process that relies upon iterative methods. First designed in the early 2000s, it didn’t become popular until a team of developers released specifications for its use. Since then, many new iterations of Agile have emerged.

Under traditional software development (“Waterfall” development), companies produced large chunks of features and functionality at a time. Companies achieved significant milestones, developed their product, and then had the client weigh in.

In the early days of software development, this worked fine. But as software became more complex, it became a cumbersome, slow process. Each minor change that a client made would set the project back.

Agile made it easier to constantly change and improve upon the product as an iterative process. Under Agile, developers could package smaller features and changes at a time. Because the process was iterative, developers could collect and act upon feedback faster. There were no huge releases or tremendous packages to deal with.

The focus on small, iterative steps underscored a massive difference between Waterfall and Agile development — and made Agile extremely popular. In the swiftly changing world of software development, Waterfall methodologies simply couldn’t keep up. 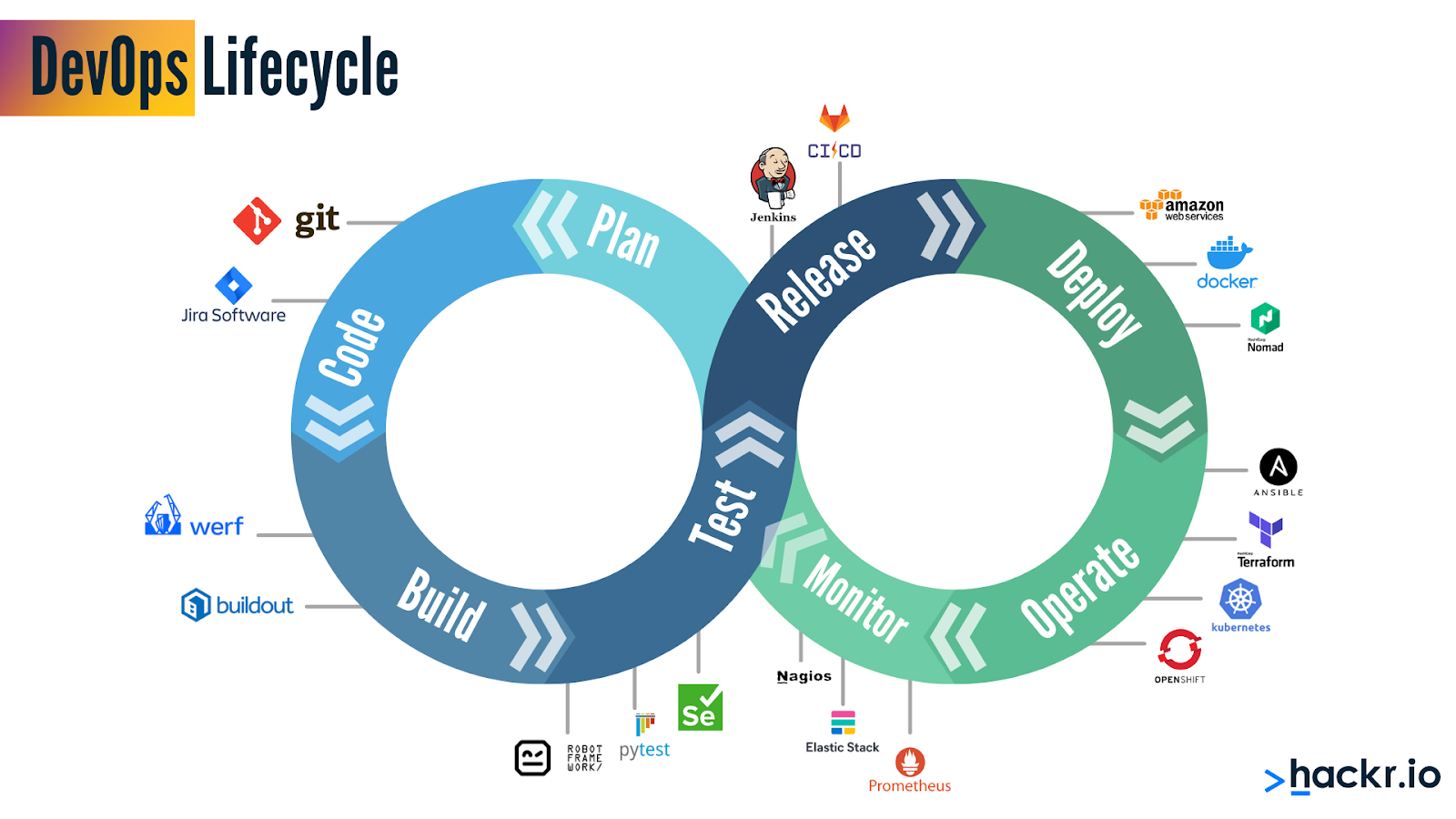 DevOps stands for Development Operations. Although it has come into focus within the last few years, DevOps started to become popular around 2008. DevOps describes a specific development process that relies upon continuous integration and delivery. Under DevOps, developers quickly push changes to a product down the product pipeline. There, the changes are rapidly tested and then automatically staged.

While Agile focuses primarily on philosophy and processes, DevOps is supported almost entirely by technology. Containerization, code management, unit testing, automation — DevOps requires that an organization have a solid technological stack and a well-developed (and well-integrated) pipeline.

If Agile was perfect for the rapid release of desktop applications, DevOps is perfectly formed for the continuous release of cloud-based applications such as SaaS services. But because DevOps is also inherently more complex than Agile, it’s also relegated to much larger projects (and larger organizations).

Difference Between DevOps and Agile 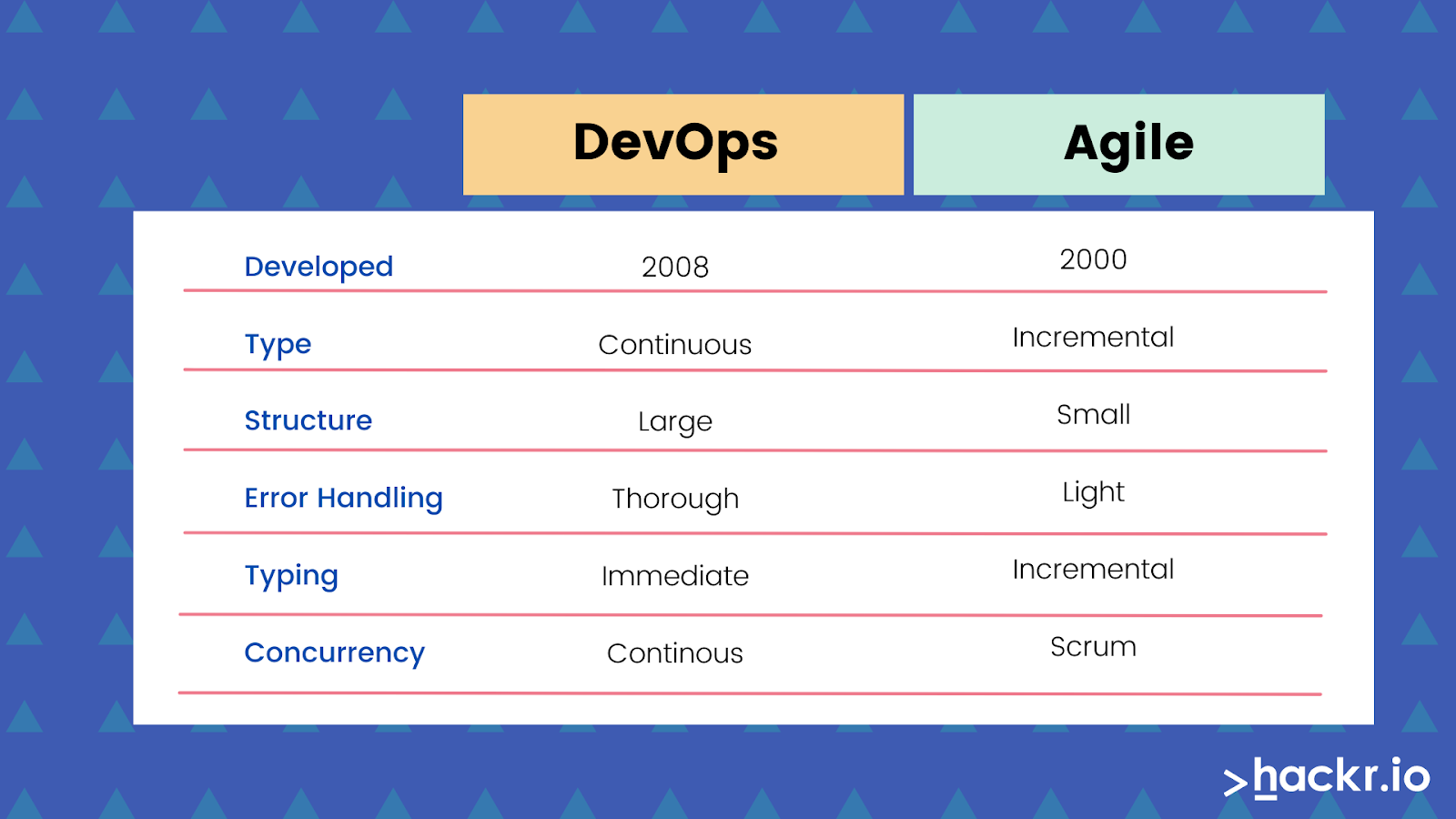 Under Agile DevOps — because DevOpsisan evolution of Agile — products are continuously delivered. Changes come in the form of small commits. The product pipeline pushes commits through an automated testing process, unit testing process, and user testing process. Developers can fix bugs as they roll new features out.

The difference between Agile and DevOps, then, can be perceived that DevOps is the “newer” version of Agile — but it’s that DevOps is a fork or variant of Agile.

Between DevOps and Agile, DevOps is even faster, and many perceive it as being more effective. At the same time, DevOps strategies require a lot of risk management.

To understand the shifted emphasis between Agile and DevOps, look at team sizes and communication styles. Agile has highly mobile, small teams which work together in daily scrum meetings and rely on light documentation. DevOps has large, collaborative teams, which sync data through communication systems and thoroughly document everything.

Why is DevOps So Important?

Developers used to build software very differently. You’d have a software platform released with version 1.0. Three months later, you’d have a release of 1.1, then 1.2, etc. Each release would be a packaging of bug fixes and new features.

Some software systems, such as operating systems, still operate like this. But what about web applications and cloud applications?

Web applications are far more likely to be modified on the fly or to have commits pushed directly to a live environment. As organizations have moved steadily toward web-based applications and the cloud infrastructure, achieving CI/CD (continuous integration and delivery) practices has become more important.

Is DevOps the Same as Agile?

In fact, a DevOps system may not even have a staging environment—some DevOps systems are so complex and intricate that (once unit tested) commits need to be pushed straight to production.

Is DevOps a Subset of Agile?

DevOps should more appropriately be seen as an extension of Agile or even a complete evolution of Agile. It is not still under the Agile methodology or Agile philosophy because it radically changes how Agile works. Agile creates an iterative, small, managed release cycle. DevOps ensures continuous releases and continuous deployment.

How is DevOps different from Scrum?

Scrum is a framework for Agile development that relies upon Agile methodologies. The idea behind Scrum is that individuals meet frequently, celebrate wins, and ensure that they maintain high levels of communication and connectivity.

Under Scrum, developers file projects as either “worked on” or “completed,” with other statuses in between. While Scrum can be a part of DevOps, it doesn’t lend itself easily to DevOps because it lacks automation. A major part of Scrum is daily “Scrum” meetings, brief stand-up meetings to ensure that everyone is still on the same page.

Today, people would rather operate in a unified, collaborative atmosphere like Slack or Teams rather than go through meetings. DevOps can support much larger teams than Scrum because less interactivity is required — so DevOps is inherently more scalable.

Under Scrum, individuals take ownership of certain aspects of the project and are manually assigned to complete them. So, while DevOps and Scrum can co-exist, they are inherently different.

Has Agile Been Replaced By DevOps?

It’s important to note that even though DevOps can be seen as an evolution of Agile, that doesn’t mean that DevOps has completely replaced agile.

An easy example is systems with large volumes of end-users, such as SaaS solutions with tens of thousands of users rather than a few hundred. Being able to push iterative commits directly to a live environment may become a headache rather than saving time.

Additionally, because DevOps requires a lot of training and process management, DevOps may not be suitable for one-off projects or projects with a clearly defined end. Agile may be better for smaller projects because it requires less bandwidth to operate.

Can Agile and DevOps Coexist?

Do Companies Still Use Agile?

Estimates show that around 44% of companies still used Agile in 2018, and many were still promoting Agile methodologies. Because DevOps is so critically important to many major enterprises, those in the industry can overestimate its popularity.

The Agile methodology still works best for companies that do not need continuous integration and deployment. Notably, companies that are not working on a web-based or cloud-based platform may not need the sheer speed and agility that DevOps provides.

Learning More About DevOps and Agile

Project managers and developers who want to learn more about DevOps or Agile can acquire training and certifications to enhance and promote their skills.

DevOps certifications will teach individuals the philosophies behind DevOps and the industry-standard technologies behind DevOps, such as containerization and code management.

To prepare for these certifications, students can look up online training, tutorials, and interview questions.

When the industry embraces new philosophies, it doesn’t necessarily remove old ones. Both Agile and DevOps could be the right solution for your organization — it’s about what your organization needs to achieve.

As a developer or a project manager, it’s important to understand both Agile and DevOps and be able to answer various agile interview questions or DevOps interviews about either. There may be times when your organization has to lean heavily on one philosophy rather than the other.

In short, choose Agile if:

[Agile vs Scrum] Difference Between Agile and Scrum
Read More