Getting Started with Docker (serversforhackers.com)
Introduction to Kubernetes (edx.org)
Kubernetes in Action (manning.com) 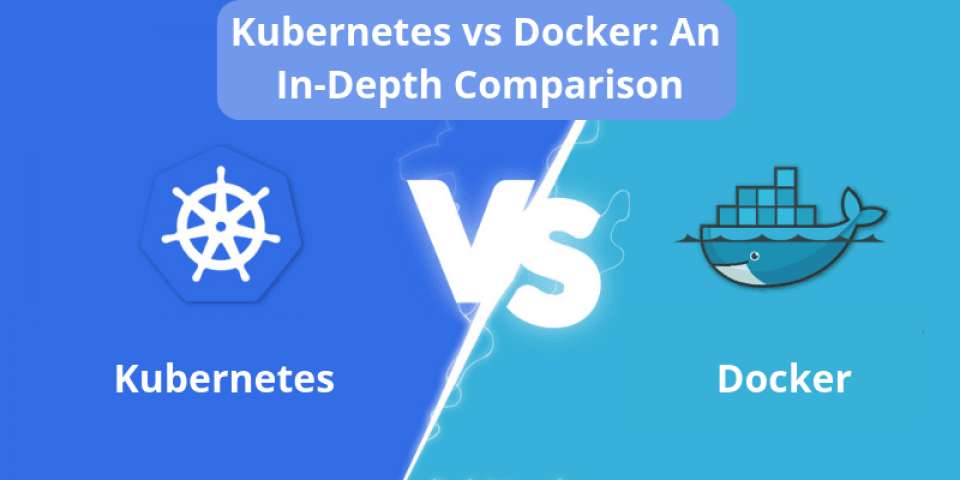 Both Docker and Kubernetes are two of the leading tools used in the cloud computing industry. While Docker is a computer application that uses the concept of containerization, Kubernetes is a container orchestration system.

Typically, Docker and Kubernetes are used in line with one another. However, Kubernetes vs Docker is a ragingly popular topic in the cloud computing community.

Before comparing the two most important cloud computing technologies (Docker vs Kubernetes), let’s first get a brief introduction about each of them first.

First released in June 2014, Kubernetes was originally developed by Google. The further development and maintenance of the open-source container orchestration system is the responsibility of the Cloud Native Computing Foundation.

According to the official website, Kubernetes is “an open-source system for automating deployment, scaling, and management of containerized applications.”

Using containerization technology, Kubernetes allows running containers across several compute nodes that can be bare-metal servers or VMs. Depending on the requirements at any given time, Kubernetes can make the containers spun up or torn down.

Before using Kubernetes, one needs to double-check a number of things. One such is to ensure that all the participating compute nodes are securely connected with one another.

Developed by Docker, Inc., Docker was first released in March 2013. It is a computer program that is able to perform operating-system-level-virtualization, popularly known as containerization.

Docker can be viewed in two different lights. From the first POV, Docker containers are truly lightweight VMs and from the second perspective, Docker is a software packaging and delivery platform.

The latter aspect is primarily responsible for the immense popularity of the Docker containerization technology and its widespread adoption in the cloud computing industry.

Is Kubernetes vs Docker a Relevant Query?

Comparing Docker with Kubernetes is like comparing the Sun with the Moon. Of course, both are heavenly bodies but a comparison between the two doesn’t sound right! This is because while both shine, one is a star and the other is a natural satellite.

Although Docker can run without Kubernetes and Kubernetes can function to the fullest without Docker, using both in co-op improves the functionality of each other. So, the debate that is Kubernetes vs Docker is bizarre, if not completely irrational.

Docker can be installed on some computer to run containerized applications. The approach of containerization means running apps on an operating system in a way that they are isolated from the rest of the system. The application might feel like it has its very own dedicated OS.

Now, when you have Docker installed on several hosts i.e. operating systems, you can benefit from Kubernetes. In such a case, we refer to these hosts as nodes or Docker hosts that can be bare-metal servers or virtual machines.

The beauty of using Kubernetes with Docker is that it assists in automating container load-balancing, networking, provisioning, scaling, and security across all the Docker hosts from a solitary dashboard or command line interface.

Making the application(s) more scalable and making the infrastructure more robust are two best reasons for opting for multiple nodes. A collection of nodes managed by an individual Kubernetes instance is called a Kubernetes cluster.

Difference between Kubernetes and Docker

Docker Swarm or simply called Swarm is an open-source container orchestration platform. It is the native clustering engine for Docker and thus, uses the same command line as that used by Docker. Following are the various important differences between Docker and Kubernetes:

Docker Swarm offers high availability as the services support replication in Swarm nodes. The Swarm manager nodes are responsible not only for managing the entire cluster but also the resources belonging to the worker nodes.

All the pods are distributed among the nodes in Kubernetes. This not only enables Kubernetes to tolerate the failure of application instances but also offers a high degree of availability.

The load balancing services in Kubernetes are responsible for detecting unhealthy pods and getting rid of the same. Kubernetes offers a higher availability than Docker Swarm does.

Although the Docker Swarm API doesn’t support all Docker commands, it offers almost all the best functionality from Docker.

So, Docker Swarm supports most of the tools available for Docker. However, if the Docker API is not capable of some required operation, there is no easy workaround available for utilizing the same in Docker Swarm.

Like Docker Swarm, Kubernetes has its very own version of API, client definitions, and YAML. However, these vary from that of their Docker counterparts.

Hence, there is no possibility of using Docker CLI or Docker Compose for defining containers in Kubernetes. In scenarios where the platform needs to be switched, YAML commands and definitions are required to be rewritten.

Typically, an ingress is used for load balancing in Kubernetes. However, there is another way around in which a pod in Kubernetes is exposed via service. It can be then utilized as a load balancer within the cluster to which it belongs.

Docker Swarm features a DNS element, which can be used in order to distribute incoming requests to a particular service name. For load balancing, the services can either be assigned automatically or made to run on user-specified ports.

Kubernetes follows a flat networking model. Therefore, all pods are allowed to interact with one another. How the interaction amongst pods will happen is specified by network policies. Usually, the flat network model is implemented as an overlay.

In Docker Swarm, the node joining a swarm cluster is responsible for: Kubernetes is a comprehensive framework for distributed systems. Because it offers a unified set of APIs and strong guarantees about the cluster state, Kubernetes is a complex system. These abilities are responsible for slowing down the container deployment and scaling.

When compared to Kubernetes, Docker Swarm is able to deploy containers at a much faster speed. Hence, it allows faster reaction times to scale a system as per requirements.

The Synergy among Docker and Kubernetes

Kubernetes is capable of working in tandem with any containerization technology. RKT and Docker are two of the most popular options for the open-source container orchestration engine. However, the latter is preferred much more than the former.

Due to the greater preference for using Docker with Kubernetes, a lot of effort has been put into perfecting the cooperation amongst the two technologies.

Although Docker has its very own container orchestration engine in the form of Docker Swarm, the penchant for using Kubernetes with Docker can’t be overlooked. This is evident from the fact that Docker for Desktop comes with its very own Kubernetes distribution.

Therefore, it is clearly evident that both technologies, Docker and Kubernetes, have joined forces and also benefit greatly from this collaboration.

Head to Head Comparison between Kubernetes vs Docker

That sums up the Kubernetes and Docker comparison. Hope all your queries are resolved now. Both (Docker vs Kubernetes) are by far two of the most used technologies in the cloud computing industry. Hence, it is high time to start using them if you haven’t already.

Share your views and opinions about Docker and Kubernetes technologies via the dedicated comments window below.

Why is Docker better than VM?

What are the disadvantages of Docker?

Can Kubernetes run without Docker?

Is Kubernetes a PaaS?

Which is best docker or Kubernetes?

Thanks for sharing Very Use ful Blog..

Getting Started with Docker (serversforhackers.com)
Introduction to Kubernetes (www.edx.org)
Kubernetes in Action (www.manning.com)
Welcome Back
Continue with: