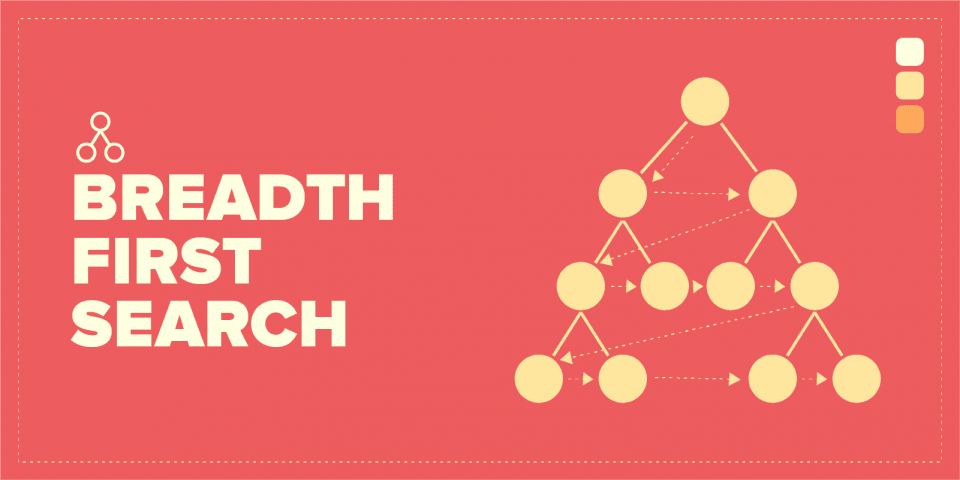 What is the Graph Algorithm?

A graph is an abstract way of representing connectivity using nodes(vertices) and edges G = (V, E). Graph nodes are labelled from 1 to n, and m edges connect pairs of nodes. These edges can either be unidirectional or bidirectional. Graph algorithms have formulated and solved a lot of problems such as shortest path, network flow problems, graph colouring problems, and much more. Representation of a graph G = (V, E) is done in two standard ways, i.e., adjacency matrix and adjacency list. Some particular popular types of graphs are:

What is the Breadth-First Search Algorithm?

Shortest Path: It is defined as the path from source S to vertex V in graph G containing the smallest number of edges. Breadth-first search is so named because it divides the discovered and undiscovered vertices uniformly across the tree. The algorithm discovers all vertices at k distance from s before discovering any more vertices at k +1 distance. Breadth-first search colors each vertex gray, white or black to keep track of all the vertices and discriminate between them. A vertex is white until it is visited by the algorithm during the search upon which it turns nonwhite. Gray and black vertices denote that they have been discovered, but breadth-first search gives them a different color to move breadth-first manner. If (u, v) E and the vertex u is black in color then the vertex v is either gray or black it means if a vertex is black then all vertices adjacent to them have already been discovered.

There is a probability that gray vertices could have some adjacent white vertices. They represent the frontier between undiscovered and discovered vertices. It creates a tree first containing only the root or the source vertex S. Whenever the algorithm encounters the white vertex v while scanning the adjacency list of an already discovered vertex u, then the vertex v and the edge (u, v) are added to the tree. This way, u is termed as the predecessor or parent of v in the breadth-first tree. This relationship of ancestor and descendant in the BFS tree is defined relative to the root; if vertex u is on the path in the tree from S to v, then u is the ancestor of v and v is the descendant of u.

The pseudocode of the algorithm is as under:

The operation of BFS on an undirected graph. Tree edges are shown as shaded as they are produced by BFS. The value of u.d appears within each vertex u. The queue Q is shown at the beginning of each iteration of the while loop. Vertex distances appear below vertices in the queue. Once all the nodes are visited the algorithm computes the shortest path between the root node s and its linking nodes. `

Let us know consider analyzing the running time of the BFS algorithm on an input graph G= (V, E). After initialization, the breadth-first search never whitens a vertex and thus ensures that each vertex is enqueued and dequeued at most once. Time taken by each enqueue and dequeue operations is O(1), and so the total time devoted to queue operations is O(V). The algorithm scans the adjacency list of every vertex at most once and when the vertex is dequeued. The sum of the lengths of all the adjacency lists account to ?(E), the time spent to scan the adjacency lists is O(E). The overhead for initialization is calculated to be O(V), and thus the total running time complexity of the BFS algorithm is O (V + E).

So, the algorithm runs in linear time concerning the size of the adjacency list representation of graph G.

Why do we need a BFS Algorithm?

BFS algorithm offers several reasons to be used when searching for your data in any dataset. It provides us with considerable aspects to make itself consider as an efficient algorithm. Some of the popular aspects are:

Enlisted below are rules for using the BFS algorithm:

Some of the real-life applications of the BFS algorithm implementation are listed below:

That was the simple graph traversal algorithm, the breadth-first search algorithm. In summary, the graph traversal requires the algorithm to visit, check, and update, too(if needed), all the unvisited node in a tree-like structure. The BFS algorithm is known for analyzing the nodes in a graph and finding the shortest path of traversal. The BFS is an efficient algorithm with the complexity of O(V + E), and its graph traversal consists of a smaller number of iterations in the shortest possible time and doesn't get stuck in an infinite loop. The algorithm is used in multiple real-life applications such as web crawlers, P2P networks because of its robust nature. Have you noticed any application where you think the BFS algorithm could be at work behind it? Share with us in the comments below.